When Some See Risks Where Others Don’t


Over the last few weeks many polls have tried to get a read on people’s views about the coronavirus. This is usually done with representative samples, which means people from various demographic backgrounds in a country are included. YouGov is an internet-based market research and data analytics firm that does tons of polling for which they post the data online. It’s worth having a look, both at their US site, and the UK site, with people’s responses on many aspects of the virus, including how concerned they are about it, whether they think they will catch it themselves, or have changed their own behavior.

Hidden in plain sight in practically every poll is a striking difference between people: Women consider the risk to be far greater than men, as do ethnic minorities relative to White people. These patterns are apparent just by eyeballing the numbers, without any sophisticated statistical analysis.

This effect can be seen in a UK poll from 12-13 March: 45% of women, but only 31% of men said they were scared of the virus. Similarly, 64% of women reported to wash their hands more frequently, whereas only 57% of men said so.

In addition to gender, polls conducted in the US also asked about race. In a poll from March 8-10 there is a striking pattern (Figure 1): Only 60% of White men reported being "very concerned" (blue bars) or "somewhat concerned" (red bars) about a cornonavirus epidemic in the US, compared to 73% Black men.

Figure 2 shows that 69% White women reported being either "very concerned" (blue bar) or "somewhat concerned" (red bars), higher than the 60% of White men shown in Figure 1. An even bigger difference was found for Black women, namely 82%.

Figure 2: Women's concern about coronavirus epidemic in US, in poll conducted from March 8-10, 2020.

These patterns are consistent with the so-called White Male Effect, documented by Finucane, Slovic, Mertz, Flynn, & Satterfield (2000). Figure 3 reproduces their findings, namely that White males rate all risks, such as dangers from handguns or natural disasters, as lower than other demographic groups. Finucane et al. suggest that different risk estimates are due to White males perceiving the world, including risks to their health, as more controllable, probably due to the fact that they typically have high status, and high power in society. Interestingly, the White Male Effect was not observed in a more egalitarian society, namely Sweden, as found by Oloffson & Rashid (2011). 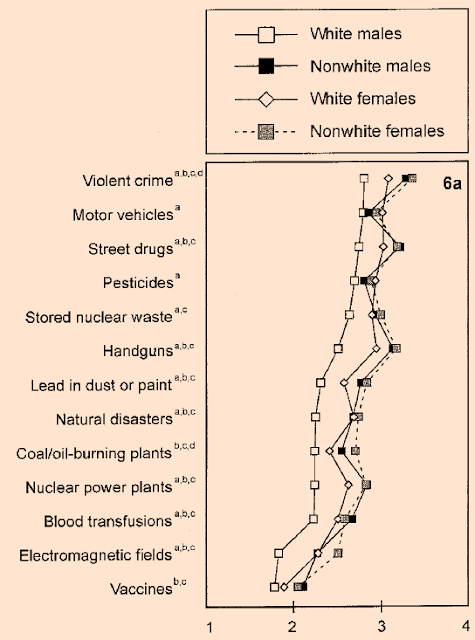 This effect can be a serious issue because White men are disproportionally represented in positions of leadership, including roles related to public policy decisions, so they they might underestimate the health risk related to the coronavirus. In addition to politicians, individuals also have to decide for themselves whether they want to change their ways to avoid catching the virus, so White men will probably be less likely to follow recommendations. This is especially problematic because a paper in the New England Journal of Medicine found that there were actually more male (58%) than female (42%) patients among those who showed the COVID-19 disease in China, so men might be more likely to get ill.

Let me emphasize that it’s nobody’s fault what race, gender or socio-economic background they were born into, and there are plenty of other demographic variables based on which people are disadvantaged. I also don’t think people make suboptimal decisions intentionally. The effects I describe simply reflect the current reality of how people differ in how they see the world. For all of us it’s worth to every now and then ‘check your privilege,’ and keep in mind that we’re all prone to biases that happen outside of conscious awareness.

People’s perception of risk differs depending on how well they feel they are able to cope with a given challenge. This can be due to resources objectively are available to them, such as money, power, social status, and so on. But it can also be highly subjective, when people feel personally threatened for whatever reason, perhaps because of past life experiences (e.g., they were brought up in a poor home). So, what seems like a molehill to some may look like a mountain to others. When we’re considering school closures, social distancing and other interventions to combat the virus, we should include people from diverse backgrounds in order to get a better sense of the risks involved.
Posted by Simone Schnall at 1:01 PM

Simone Schnall
Dr. Simone Schnall is an Experimental Social Psychologist in the Department of Psychology and Director of the Cambridge Body, Mind and Behaviour Laboratory at the University of Cambridge. She also is a Fellow and Director of Studies at Jesus College Cambridge, and Visiting Fellow at the Bennett Institute for Public Policy. This blog reflects her personal views.